Top news story: The theme of price increases will be covered in the second section of the Review, and I will now mention one of the most important components of this process – the rise in food prices.

The world will pay a record $1.72 trillion this year for food imports. According to the Food and Agriculture Organization of the United Nations, this is 12% more than a year earlier.

We will note, as we said a month ago, that the April PPI of the United States is 6%, but if we take into account intermediate prices – about 17%. By autumn, this inflation will increase along the value chain, but some of it will break: consumers will not be able to operate at this rate of price increase. Consequently, by the beginning of autumn, the PPI will have stopped at 10-12% and, in the absence of additional emissions (which does not seem obvious), the overall price increase will have reached the same level by the end of the year. Of course, it will be underreported in official data.

Hence, from very different sources, we can estimate the increase in prices in the world economy from year to year. Obviously, provided there is no new emission wave before the beginning of the fourth quarter.

Japan’s GDP in the first quarter -1.0% per quarter:

And industrial production was -1.0% – the 3rd monthly minus for the last 4 months:

In France output of industry -0.1% per month – 3rd minus in 4 months, overall performance in these six months negative:

In Britain -1.3% per month – the overall performance has been negative since the onset of winter:

France's balance of trade is its worst in 8 months.

But the most unpleasant picture is that of inflation. CPI (Consumer Price Index, which politicians and other officials call simply «inflation») USA in May 0.6% per month and 5.0% per year - record since 2008:

Without food and fuel (the so-called «root» index excluding high-volatility components) 0.9% in May – peak since 1982:

Let us remind that the volume of domestic subsidies in China is approaching American values before the beginning of the last coronavirus expansion, about 25% of GDP per year. Such growth means that either China, like the US, has started to further stimulate its economy, or the mechanism of sterilization of the money supply – the mechanism for sterilizing the excess money supply – which in China is built by converting excess liquidity into dollar export income, in a very different way than in the US – has started to fail. 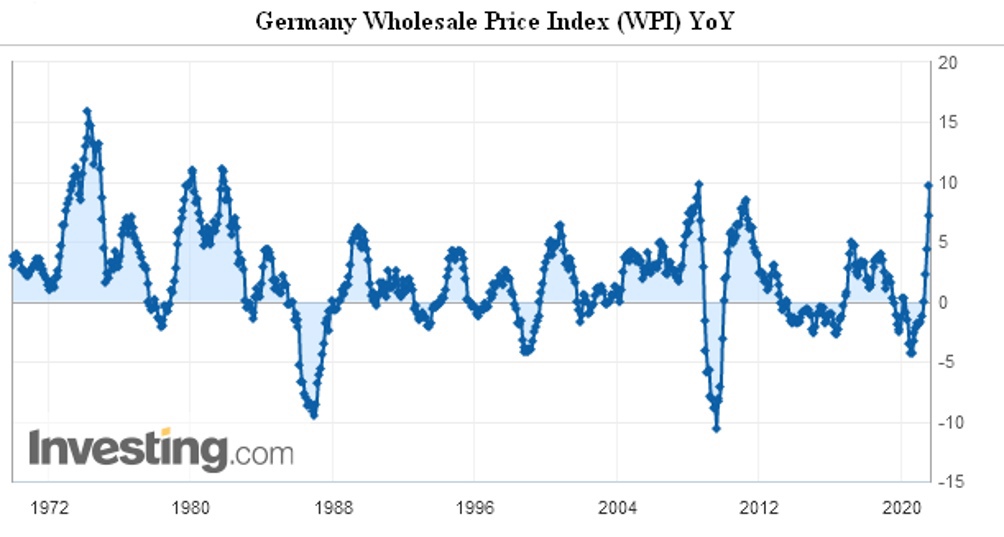 In the US, housing prices are also rising at record rates, reducing mortgage demand:

Employment in the Euro Area decreased in the first quarter:

Why the number of job openings skyrocketed to an all-time high:

Retail sales in Italy in April -0.4% per month:

The Bank of Russia raised the rate by 0.5% to 5.5% and promises to continue tightening.

The ECB has kept up the pace of government bond purchases.

The Central Bank of Canada left its monetary policy unchanged.

Summary: The inflationary wave is clearly gaining power. At the same time, some experts close to the financial authorities of developed countries (including Russia) launched a campaign to convince citizens that the crisis was gradually ending. It should be noted that even according to official statistics, the situation cannot be said to be optimistic, and the reality is likely to be even worse.

In particular, we have already given (and repeated in the first section of this Review) an example of how the Producer Price Index (PPI) in the US is understated. The main objective is to inflate GDP, an indicator that is highly politically significant. But reality will come to light sooner or later, and for this reason the figure of 10-12%, which comes from different estimates, seems not only adequate but even somewhat optimistic. Therefore, to all those who can afford to take a quick vacation, we recommend that and to do so: by the end of the summer, quarantine activities may be tightened again. However, some other circumstances, such as geopolitical ones, might play a role.

Wish our subscribers a successful weekend (for Russian readers it will be long) and let’s hope that the Biden-Putin summit in Geneva will be as successful as possible for all countries of the world!