Top news story: The American stock market is growing in scale all the time, and in different ways. The following graph shows the total distribution of financial assets of households, mutual funds, pension funds and foreign investors. 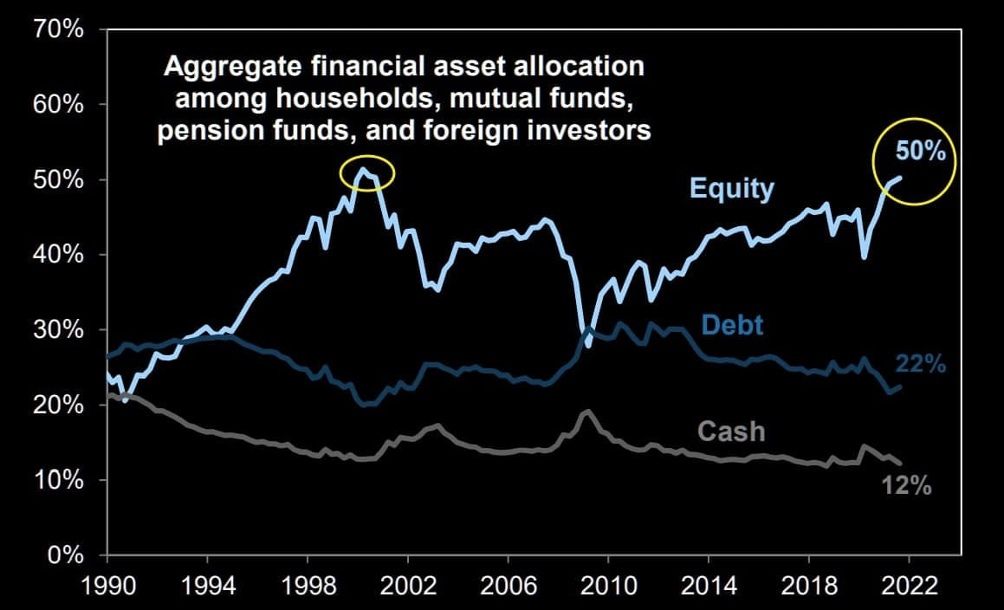 As you can see, the share of equities exceeded the peak reached before the Dot Houses crisis in the early 2000s. It may be recalled that on September 10, 2001, I wrote that I foresaw major terrorist attacks that could be carried out in the United States.

This foreboding was based on the fact that the American economy’s statistics were drastically negative in the end of the summer, and no one wanted to explain it to the public. And the control system had to change, otherwise the total collapse could have happened sooner. Obvious analogies to the current situation are called for – just as then, official statistics are increasingly deviating from reality.

At that time, there was no Mikhail Khazin Foundation for Economic Research or its reviews, but it was possible to obtain an objective picture if you wanted to. I am now trying to provide such information in the macroeconomic reviews of the Khazin Foundation, which will allow our readers to draw informed conclusions and make appropriate decisions. It should be noted that experts always suggest to continue investing in the stock market:

These recommendations apply not only to the US market, but also to the EU market.

Unlike previous reviews, we will form a separate module on the Chinese economy. Especially as July figures in China were markedly lower than expected.

The schedules indicate that the process has been ongoing for several months. In fact, China is repeating itself in the US: after recovery, the economy slips back into recession. Another is that, because China’s economy is outward-oriented, it has received additional stimulus from the global recovery. But the latter also ended, so who will be the «mobile force» (theoretically) of possible growth is not absolutely clear. In our assessment, the world economy is experiencing a downturn that is only worsening.

Machinery orders in Japan -1.5% per month:

It may be recalled that a positive growth rate can be attributed to the fact that under-inflation in real terms automatically increases the nominal level of production and sales. Of course, this is not true, but from the point of view of the index methodology, there are formally positive trends. The same is true of the Philadelphia FRB index, which has an eight-month minimum:

This week there are not many data on inflation, but the overall picture remains the same. British PPI (Producer Price Index) + 4.9% per year, the highest since 2011:

Without food and fuel (the most volatile component of the index) +3.3% per year, has repeated its peak since 1991:

The number of new buildings in the United States is -7.0% per month. The number of building permits, however, increased slightly after three consecutive months of decline:

Mortgages in the USA is -3.9% per week, as the rate on loans has become slightly higher:

Retail sales in the United States -1.1% per month and this is against a backdrop of low inflation:

Without cars, it is also negative:

The Central Bank of New Zealand left rates in place, contrary to expectations of their growth. The Central Bank of Indonesia hasn’t changed either. Like China’s central bank, which, however, directly pumps liquidity into the financial system in relatively large amounts (about 25% of GDP per year).

Summary: Just in case, I will repeat the real rates of industrial inflation in the United States: 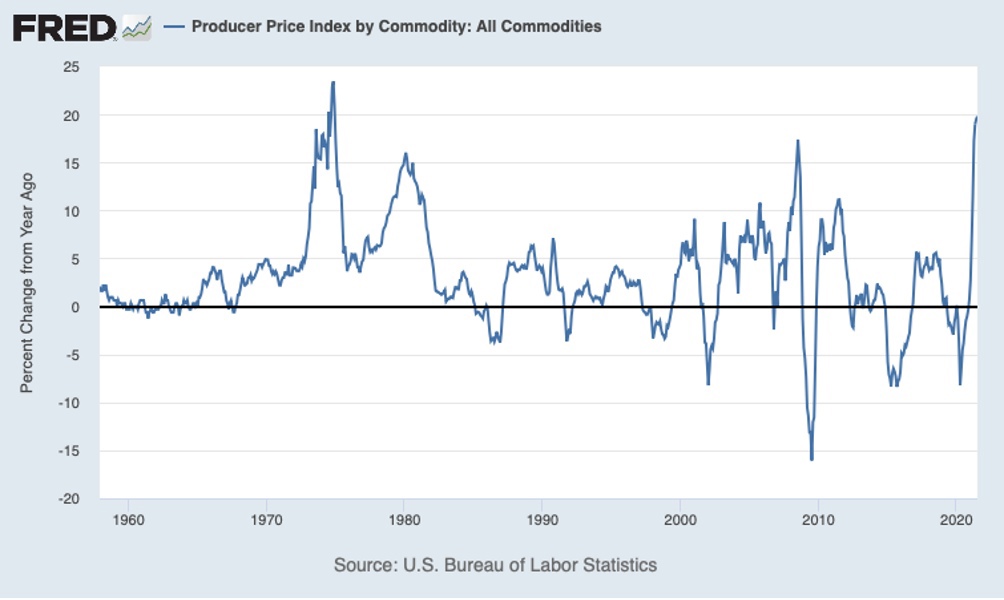 It cannot be ruled out that there is also an understatement, but at any rate, 20% is much more like the truth than the official 6% or so. There is no doubt that this pattern is similar in many other countries, leading to inconsistencies in indicators. In the US, for example, sales are falling against the backdrop of rapid (official) GDP growth.

The explanation for this effect is very simple: GDP growth is fictitious and is caused by under-inflation.

There is no doubt that by the end of the year, and possibly earlier, high rates of industrial inflation will be translated into increases in consumer prices. In fact, this is happening, and we see it by proxy – pessimistic consumer behavior is completely inconsistent with optimistic economic statistics. But sooner or later, the rupture will become so great that it will have to be explained one way or another.

However, it is not possible to raise the rate, as was done in the previous period of sharp price hikes in the 1970s: the amount of accumulated debt is too high. This means that emissions will continue (in fact, in the US it has already been announced) and accordingly will be pumped up «bubble» in financial markets, which will explode sooner or later. Then there will inevitably be a sharp write-off of accumulated debt through massive corporate and household bankruptcies with the subsequent transition of the economy to a well-balanced regime, accompanied by a significant drop in GDP.

We wish all readers of the reviews of pleasant summer weather and successful work week!