«The plan to save the economy»

Top news story: The main event of the week was the approval of the «support program» of the USA economy in the amount of 1,9 trillion dollars. The quotes we put on are because the real economy in the current conditions will get a few crumbs from this money. But first, we want to show you a wonderful graph: 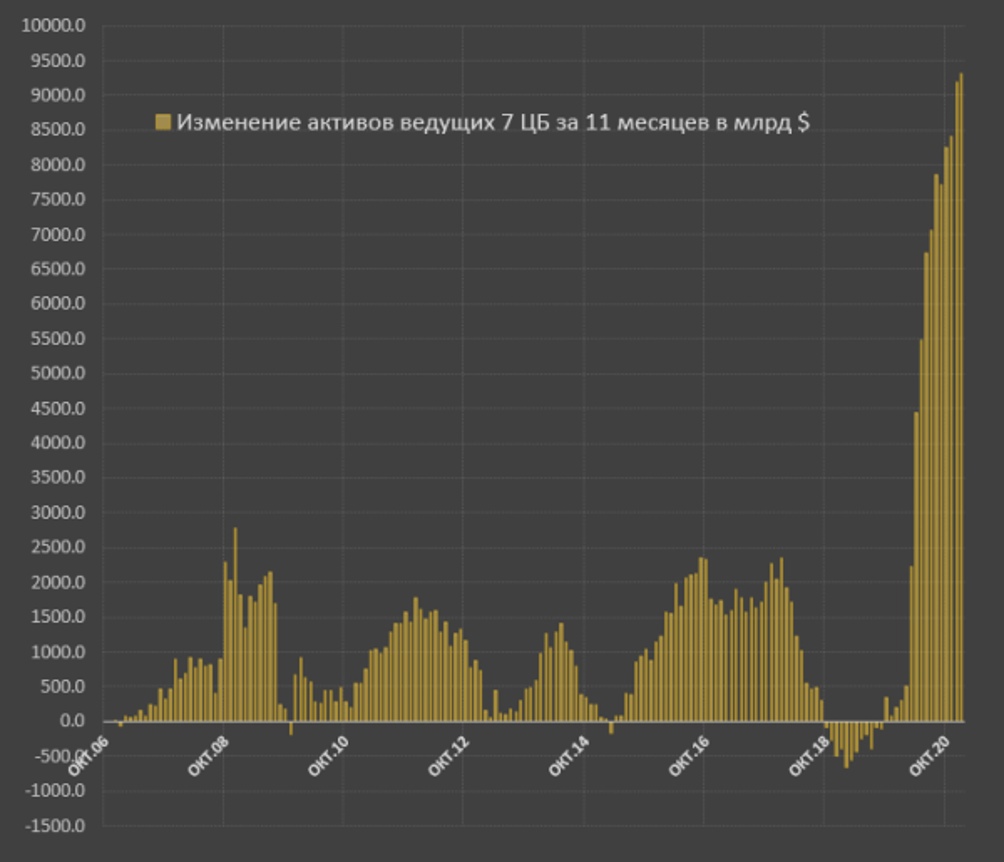 The scale of the emissions is astonishing, and it is several times higher than each of the previous programs – and bigger than all of them combined. Why doesn’t that money go to the economy? First of all, the reason lies in the population’s debt, which in the US accounts for 92% of real disposable income. Incidentally, this is better than 2008, when it was over 130% but well above the 60% norm. Consequently, in times of crisis, households tend to meet part of the debt, thus returning the money to the financial sector, rather than using the received funds for consumption, thus channelling them into the economy. But this is not the main problem.

The main problem is as follows:

Historical savings rate in the US – about 10%. Before the beginning of the crisis in 2008 it was from -5% to -7%. We have written many times about the specifics of American statistics, which constantly make adjustments to improve the overall picture and, in particular, to increase consumer optimism. Indeed, it was through methodological changes that negative savings turned at some point into positive savings. At the peak of the epidemic, official savings exceed 30%. Given the specificity of the statistics, it is possible to reduce these figures by about 10%, respectively, real savings have exceeded 20% or more than twice the norm, but the main thing is growth, which is likely to be objective even in official statistics.

It accounts at least 25% of the actual disposable private income. Without going into detail, private demand, which accounts for about 69% of US GDP, has shrunk by a quarter or 17%! That is the main reason for the sharp decline of the US economy in the second quarter of last year! Then things started to go well – with rising consumption and hence GDP – but now savings are back on the rise. That is, by the results of the 1st quarter of 2021, we must again come to recession. Unless, of course, once again, for the sake of Biden, adjustments to the calculation methods are not introduced. However, the worsening situation of households will not be affected.

To make consumers more optimistic, that is, to reduce savings, they are constantly given favourable forecasts such as:

But let us tell the truth, there is no real reason for optimism. Real household incomes are falling, prices are rising (see the statistics in the next section). Consequently, households whose stock of money is very low after decades of unrestrained consumption will actively accumulate savings, at the same time, reducing demand and forcing monetary authorities to increase their emission programmes.

Japan’s GDP was revised slightly downward in the fourth quarter, to +2,8% per quarter and -1,4% per year.

Britain already has GDP for January: -2,9% per month and -9,2% per year (the latest rate is the worst since July):

Industrial production in Germany slumped by 2,5% per month in January and by 3,9% per year, the lowest in four months:

And in the UK:

The annual decline in output in Mexican industry has worsened:

And in India, the annual performance returned from positive to negative:

Australia Dwelling Approvals in January -19,4% per month – housing is still high, and the rest of the sectors have been at the trough since January 2012:

Brazil has the lowest business confidence since July 2020.

The optimism of small businesses in the United States in February rose only slightly from the trough:

American consumer inflationary expectations rose to 3,09% per year in February, the highest rate since July 2014:

Inflation itself is still moderate: +0,4% per month, of which more than half came from gasoline (+6,4%):

And the US PPI (Producer Price Index) is rapidly accelerating: overall, +2,8% per year – a three-year peak:

Mortgage applications in the US dropped down again last week, especially in the refinancing segment:

Because the mortgage rate has updated the 8-month high (3,26% for 30-year fixed interest loans):

Retail in Indonesia in January -4,3% per month and -16,4% per year (close to the worst values of last spring):

The Central Bank of Canada has left its monetary policy unchanged.

The ECB has not changed rates - but plans to boost government bond purchases in the next quarter to stem interest rates.

Summary: The downturn of the initial period of the COVID-19 quarantine was partially compensated, but, as with the structural crisis, a new mechanism of recession was set in motion. This is an increase in household savings, which leads to inefficiencies in government support of the economy, a decrease in sales and, consequently, a decrease in GDP. Accordingly, the money emitted is not used to invest or increase sales, but to further inflate bubbles in the stock market.

A comparison of inflation rates in the United States is of considerable interest. There is no increase in prices in the industrial sector due to a decrease in private demand. Conversely, in the fuel and food segments, prices rise because demand is not elastic. And prices in the industrial segment are rising at an accelerated rate, because as sales go down, fixed costs are not going away. We think that once it becomes clear that the Biden administration, unlike the Trump administration, will not massively support the real economy, bankruptcy in the US may take on a massive scale.

In fact, it can be said that pure emission-based methods of supporting the economy are no longer effective. But it is impossible to give them up either, because some of the printed money, though decreasing all the time, is going into the economy. If this flow is blocked, the collapse is almost inevitable, and in fact, the monetary authorities can only hope that households will start to increase demand. But then the inflationary mechanisms will start to work at full capacity – real demand will still be reduced.